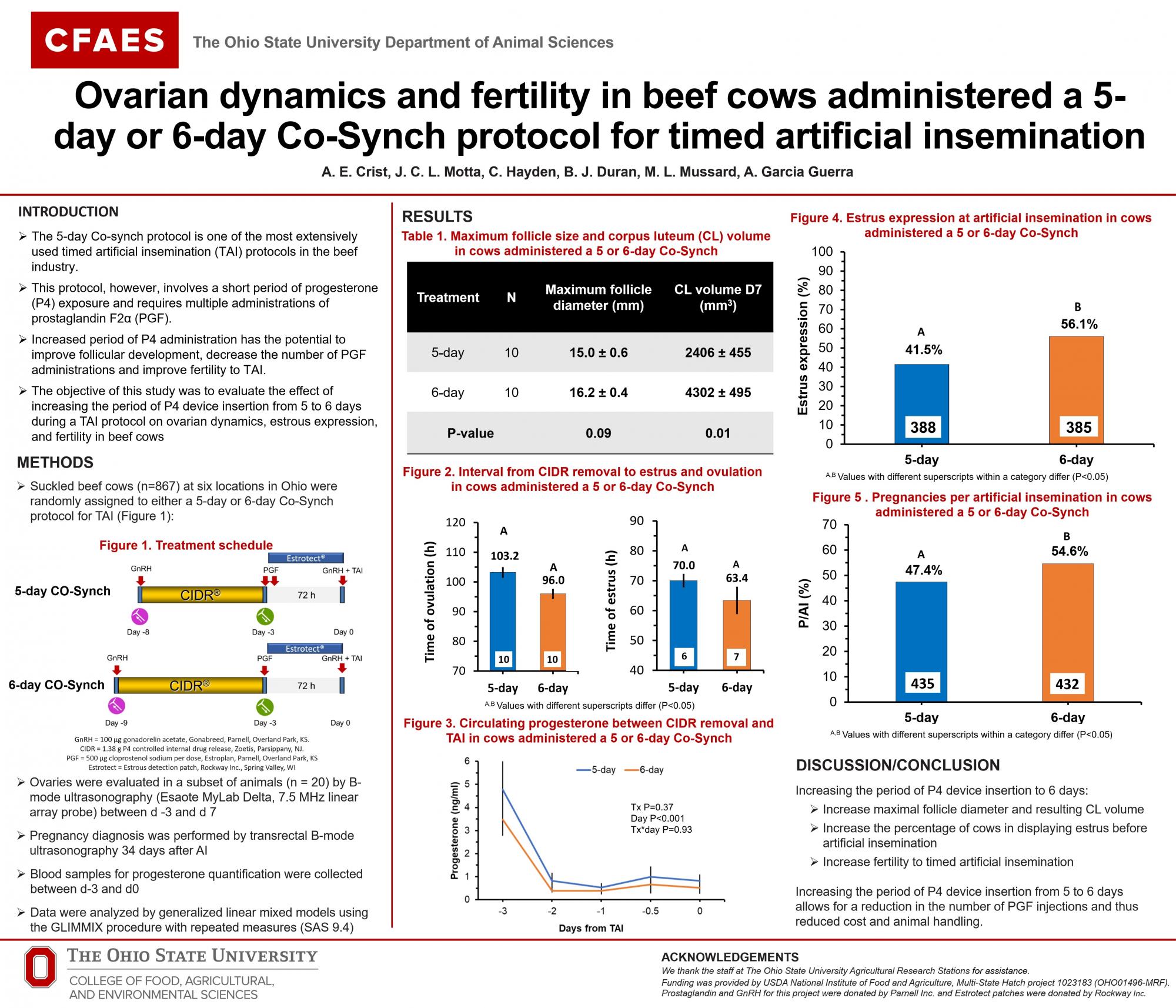 Timed artificial insemination (TAI) treatment protocols allow synchronization of ovulation and the ability to inseminate all cows at a self-appointed time. One of the most extensively used TAI protocols, the 5-day CO-Synch, entails a short period of progesterone (P4) administration and multiple administrations of prostaglandin F2± (PGF). The objective of the present study was to evaluate the effect of increasing the period of progesterone (P4) device insertion from 5 to 6 days during a TAI protocol on ovarian dynamics, estrous expression, and fertility in beef cows. Suckled beef cows (n=867) at six locations in Ohio were randomly assigned to either a 5-day or 6-day CO-Synch protocol for TAI. Cows received an intravaginal P4 device (CIDR) and 100 µg of gonadorelin acetate (GnRH, Parnell) either on d-9 (6-day) or d-8 (5-day). On d-3 CIDRs were removed, an estrus detection patch applied (Estrotect, Rockway Inc.), and either 500 µg (6-day) or 1000 µg (5-day) of PGF (Estroplan, Parnell) was administered. On d0 all cows received 100 µg of GnRH, the estrus detection patch was evaluated, and AI was performed using frozen-thawed semen. Pregnancy was determined by ultrasonography 34 days after FTAI. Ovarian dynamics were evaluated, using transrectal ultrasonography, in a subset of animals (n=20) between d-3 and d7 to determine preovulatory follicle size, time of ovulation, and corpus luteum size. Blood samples for P4 quantitation were collected between d-3 and d0. Data were analyzed using generalized linear mixed models (SAS 9.4). Cows in the 6-day group tended (P=0.09) to have a larger maximum follicle diameter (16.2 ±0.4mm) than cows in the 5-day group (15.0±0.6mm). In addition, CL volume on d7 was greater (P=0.01) in 6-day (4302±495mm3) than 5-day (2406±455mm3) cows. There were, however, no differences (P=0.15) in the interval between CIDR removal and ovulation. Cows assigned to the 6-day group had greater (Plt;0.05) estrus expression [56.1% (215/385) vs 41.5% (161/388)] and pregnancy rate [54.6% (236/438) vs 47.4% (207/435)] than cows in the 5-day group. In conclusion, an extended period of exogenous P4 during an ovulation synchronization protocol results in a larger preovulatory follicle size, increased estrous expression, thus increasing fertility to timed artificial insemination.