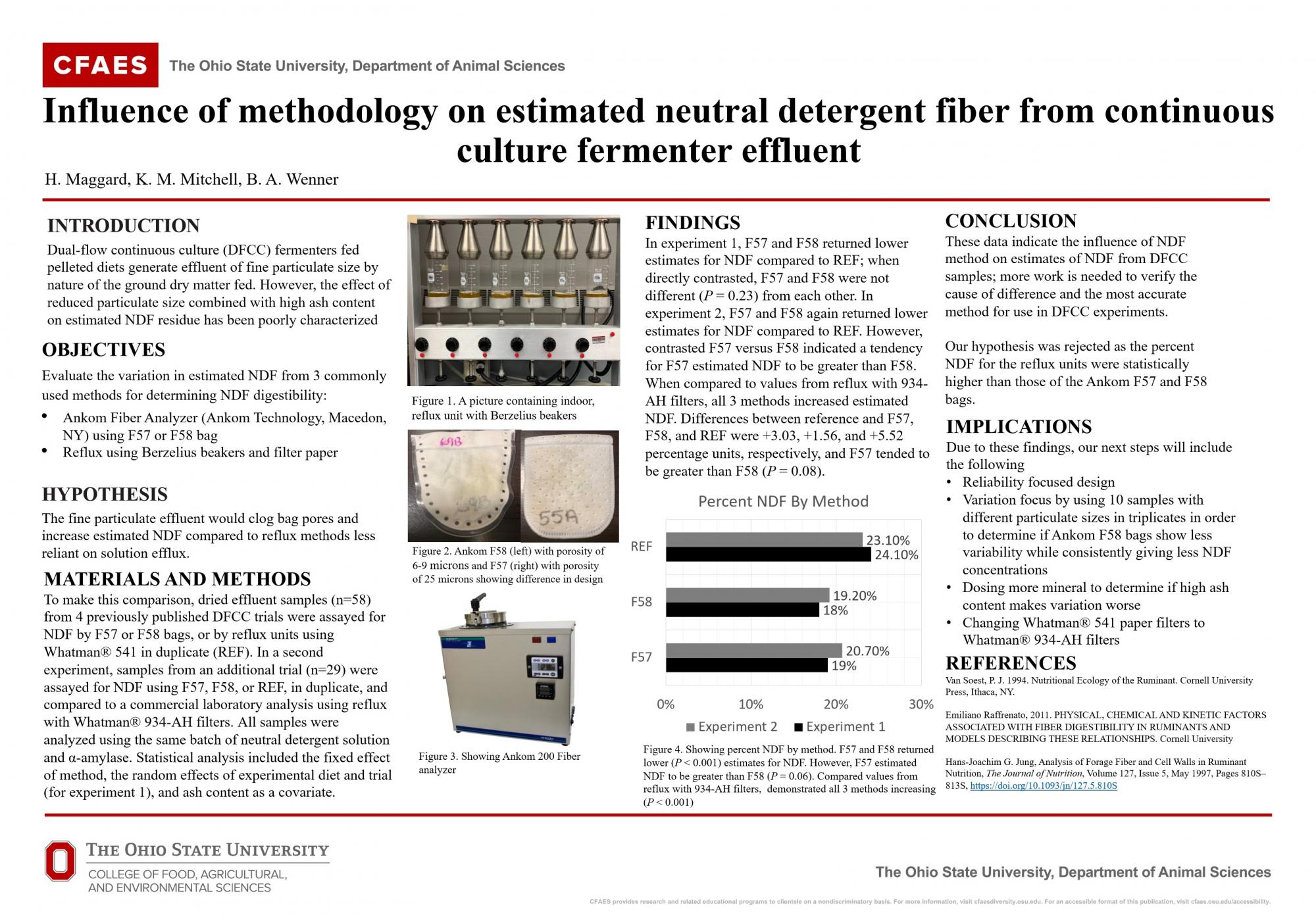 Dual-flow continuous culture (DFCC) fermenters fed pelleted diets generate effluent of fine particulate size by nature of the ground dry matter fed. However, the effect of reduced particulate size combined with high ash content on estimated NDF residue has been poorly characterized. Our objective was to evaluate the variation in estimated NDF from 3 commonly used methods for determining NDF digestibility: Ankom Fiber Analyzer (Ankom Technology, Macedon, NY) using F57 or F58 bags, and reflux using Berzelius beakers and filter paper. Our hypothesis was that the fine particulate effluent would clog bag pores and increase estimated NDF compared to reflux methods less reliant on solution efflux. To make this comparison, dried effluent samples (n=58) from 4 previously published DFCC trials were assayed for NDF by F57 or F58 bags, or by reflux units using Whatman® 541 in duplicate (REF). In a second experiment, samples from an additional trial (n=29) were assayed for NDF using F57, F58, or REF, in duplicate, and compared to a commercial laboratory analysis using reflux with Whatman® 934-AH filters. For both experiments, statistical analysis included the fixed effect of method, the random effects of experimental diet and trial (for experiment 1), and ash content as a covariate. In experiment 1, F57 and F58 returned lower (P<0.001) estimates for NDF (19.0% and 18.0%, respectively) compared to REF (24.1%); when directly contrasted, F57 and F58 were not different (P=0.23) from each other. In experiment 2, F57 and F58 again returned lower (P<0.001) estimates for NDF (20.7% and 19.2%, respectively) compared to REF (23.1%). However, contrasted F57 versus F58 indicated a tendency for F57 estimated NDF to be greater than F58 (P =0.06). When compared to values from reflux with 934-AH filters, all 3 methods increased (P<0.001) estimated NDF. Differences between reference and F57, F58, and REF were +3.03, +1.56, and +5.52 percentage units, respectively, and F57 tended to be greater than F58 (P=0.08). These data indicate the influence of NDF method on estimates of NDF from DFCC samples; more work is needed to verify the cause of difference and the most accurate method for use in DFCC experiments.