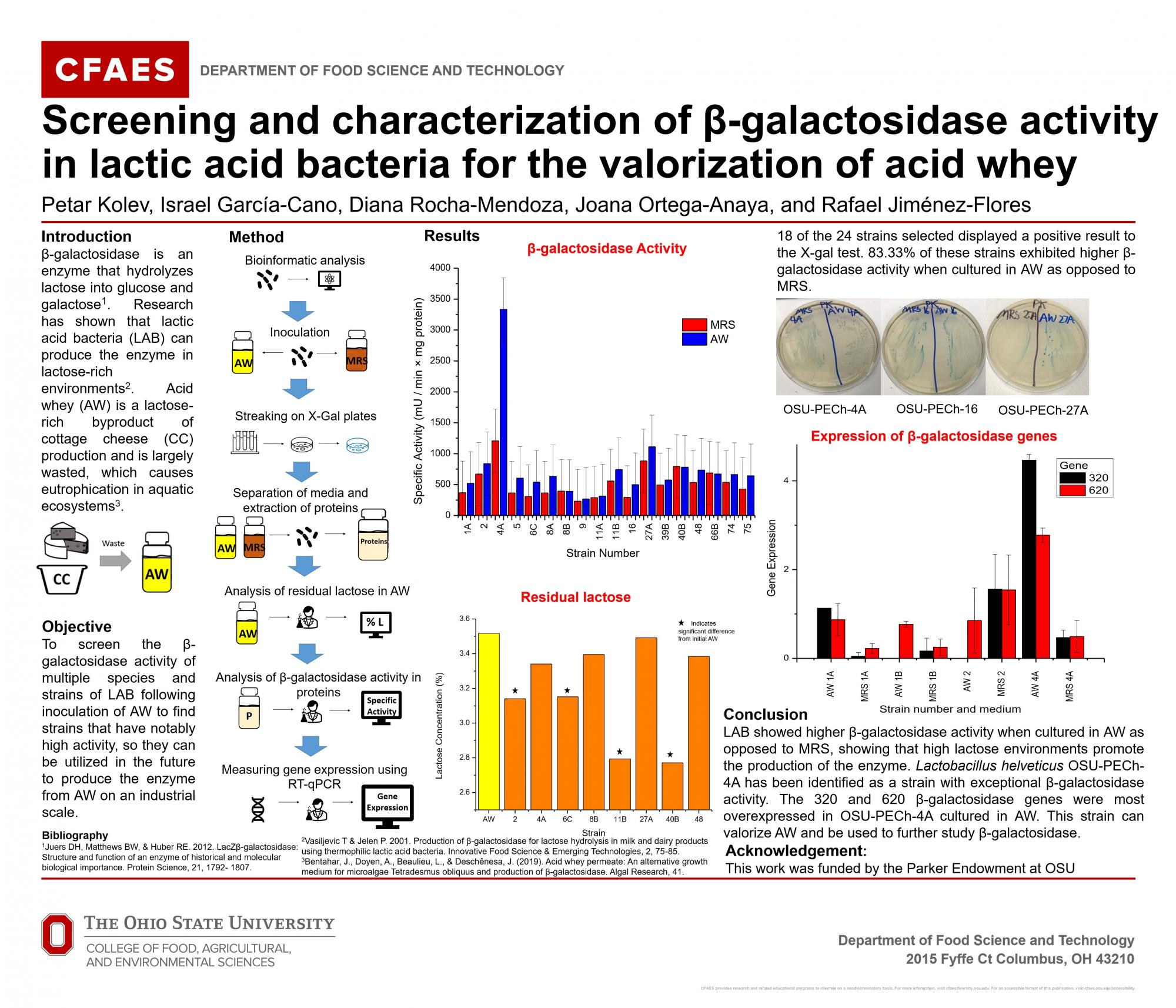 Beta-galactosidase is an enzyme that hydrolyzes lactose into galactose and glucose. This enzyme can be used to create lactose free commercial dairy products. There is also interest in its ability to catalyze, under certain conditions, the production of galacto-oligosaccharides, which are considered prebiotic compounds. beta-galactosidase can be produced by Lactic Acid Bacteria (LAB), which are commonly found in dairy products, but industrial demand is at a deficit. Acid whey (AW), which is lactose-rich, has large output from cottage cheese and remains unexploited. The purpose of this study was to understand the production mechanism of beta-galactosidase from LAB, using AW as a culture media. First, a bioinformatic analysis was conducted, using 15 species of LAB from the Parker Endowed Chair culture collection. After analysis in silico, 24 strains were selected and inoculated in De Man-Rogosa-Sharpe (MRS) broth and AW media. Proteins were extracted from cells via sonication. Bacterial growth and total protein activity were measured using spectrophotometer techniques. The beta-galactosidase activity of the proteins was determined from spectrophotometric measurements at 420 nm using o-nitrophenyl-galactopyranoside, a substrate that turns yellow upon cleavage by beta-galactosidase. The enzymatic activity was confirmed using Tryptic Soy Agar plates supplemented with X-Gal, a substrate that turns blue upon cleavage by beta-galactosidase. Finally, the expression of two beta-galactosidase genes, 320 and 620, was compared to the expression of a reference gene (16S rRNA) using the RT-qPCR. Despite lower growth in AW, 83.3% of the 18 strains that displayed a positive result to the X-Gal test also displayed a higher beta-galactosidase activity in AW. The highest beta-galactosidase activity in AW was by Lactobacillus helveticus strain OSU-PECh-4A (3331.91 mU/min mg protein). For OSU-PECh-4A, the expression of beta-galactosidase genes, 320 and 620, was 4.46 and 2.77 times greater, respectively, when cultured in AW and only 0.47 and 0.49 times greater, respectively, when cultured in MRS. These results indicate that AW contains secondary metabolites that this strain can use and is an ideal medium for some LAB to produce beta-galactosidase. LAB strains such as OSU-PECh-4A could provide processes to re-use AW and should be utilized to study unique properties of beta-galactosidase.